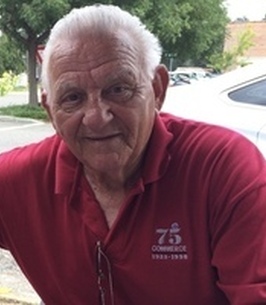 Mr. Stuart Kupferschmid, of Ellington, 85, passed away Tuesday October 11, 2022 at his residence in South Carolina. Stuart was predeceased by his beloved wife Barbara in 2017.

He leaves behind his dear daughter Robin Kupferschmid-Putira and her husband Michael Putira; his dear granddaughter Lauren Putira and her friend Gary Tomcik; his three surviving brothers Wayne and his wife Marcia, Dan and his wife Teri, Dean and his wife Joanne; his dear sister-in-law Phyllis Dunn; as well as many nieces and nephews; and his two caregivers Jan Morgan and Louise Pope. He also leaves a faithful canine companion of many years, Major. He was predeceased by his older brother Eugene and his wife Ellen, his older sister June.

Stu was a lifelong sports fan, and remained an active tennis player continuing to play local doubles tennis in Aiken several times a week until a few weeks before his passing. He had many friends both in his home state of CT and his adopted state of South Carolina, and all who knew him enjoyed his wonderful sense of humor.

Prior to his retirement, Stu was a co-owner of Ellington Agway, a home and garden sales center, and focused on selling and servicing power equipment. Both then and in retirement Stu followed the UCONN basketball teams, and especially enjoyed the women’s team for their dedication to a sport he loved, and had played as Varsity in High School.

The Graveside Service will be Saturday, November 5, at 1:00 PM, in Ellington Center Cemetery.

In lieu of flowers the family requests donations be made in Stu’s name to his favorite charities: Friends of the Animal Shelter, Aiken SC and St. Jude’s Children’s Research Hospital.